How to Find the Shortest Route with Google Maps

In today’s world, everyone is on the go. We all have somewhere to be and we want to take the shortest route possible. This is even more true for delivery drivers and sales reps, who often have many different stops to make every day.

Google makes it easy to plan the shortest route possible:

Google will offer you several different route options with the distance and travel time displayed next to them. If your preference is for the shortest route select the one with the least distance.

What’s the Difference Between the Shortest Route and the Fastest Route?

While these two routes are the same most of the time, it’s not uncommon for the shortest route to not be the fastest route. This will largely depend on traffic conditions. For example, the shortest route might take you directly through a city where there’s a lot of traffic and many lights. It might actually be faster to go around the city, even though you’re covering more distance.

Google is able to identify traffic delays using real-time data and determine both the shortest and fastest route. You can then choose which you prefer.

When to Use the Shortest Route vs the Fastest Route

This is really a matter of personal preference. Some people prioritize getting somewhere as fast as possible while others want to take the easiest and most direct route.

Here are a few things to consider:

Depending on your needs you may select a route that’s neither the shortest nor the fastest. For example, if you’re a truck driver you’ll need a route that accommodates the height of your vehicle. Assess your needs and choose the best route for you.

How to Find the Fastest or Shortest Route with Multiple Destinations 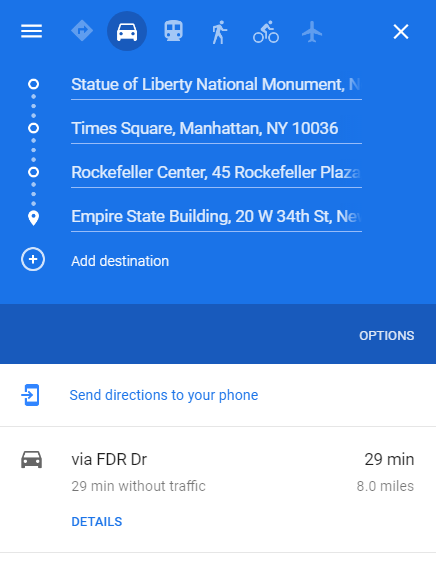 Google allows you to add up to ten stops to your route. Click “Add Destination” while creating your directions to add additional stops. Google will provide step-by-step directions from each stop.

Keep in mind that once you start adding multiple stops Google will default to only giving you the fastest route for each stop.

Drawbacks of Using Google to Find the Shortest Route

While Google Maps route planner is useful it does have some disadvantages compared to other route optimization software:

An Easier Way to Find the Shortest Route

As you can see, depending on your needs Google might not be the best tool for you. Luckily there’s a better solution for those who need to find the shortest route between multiple locations.

Maptive’s powerful mapping software includes a sophisticated route optimizer that makes planning routes easier than ever. Best of all, it’s built using Google Maps API so you get all the benefits of using Google plus some additional features.

Here’s why Maptive is a better option for route planning:

How to Find the Shortest Route with Maptive

Find the shortest route between multiple stops in seconds:

Ready to create optimized routes quicker and easier than ever before? Sign up for our ten-day free trial to give Maptive a try.